Moving From a Death Economy to a Life Economy 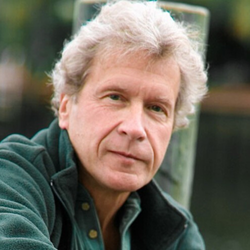 John Perkins is an activist and an American author. His best known book is 'Confessions of an Economic Hitman' which spent 73 weeks on the New York Times non-fiction bestseller list. Today, John is founder of Dream Change and The Pachamama Alliance, a non-profit organization devoted to establishing a world future generations will want to inherit.

In this presentation, John Perkins will be discussing with us how governments and large corporations negatively impact the world, and how, together, we can move from what he calls A Death Economy to a Life Economy.

John Perkins is an incredible writer & author. His first edition of Confessions Of An Economic Hit Man spent 73 weeks on the New York Times non-fiction bestseller list and has been translated into 32 languages.

The NEW Confessions of an Economic Hit Man (came out in 2016), was a follow-up to John’s classic New York Times bestseller, brings the story of economic hit men and jackal assassins up to date and chillingly home to the U.S. It goes on to provide practical strategies to transform the failing global death economy into a regenerative life economy. His newest book “Touching the Jaguar” is due out June 16th, 2020.

John is a founder and board member of Dream Change and The Pachamama Alliance, non-profit organizations devoted to establishing a world future generations will want to inherit, has lectured at Harvard, Oxford, and more than 50 other universities around the world, and is the author of books on indigenous cultures and transformation. He was awarded the Lennon Ono Grant for Peace in 2012, and the Rainforest Action Network Challenging Business As Usual Award in 2006.

He was the Chief Economist at a major international consulting firm. John has advised the World Bank, United Nations, IMF, U.S. Treasury Department, Fortune 500 corporations, and leaders of countries in Africa, Asia, Latin America, and the Middle East.

Brought to you in partnership with

You need to register to perform this action. Simply enter your email into the box below.

We use cookies This website (and some of its third-party tools) use cookies. These are important as they allow us to deliver an exceptional experience whilst browsing the site.